The 1890’s was the decade that brought us the birth of cinema. Progress within the field of photography led to William K. Dickson at the American Edison Company inventing the first functioning movie camera in 1891, and in 1893 the first Kinetoscope, the first so-called peep-hole device for viewing movies. The first Kinetoscope parlour was opened in New York in 1894. The earliest films on display at the ten viewing machines were all shorter than one minute in length, one film per machine. All films were recorded at the world’s first film studio, the Black Mariah.

If one wanted to watch films in the 19th century, this was how it was done – here is an example of Edison’s Kinetoscope circa 1895.

New film cameras and peep-hole viewing machines started being developed in Europe, primarily the UK, France, Poland and Germany, as well as Australia. Not long after, several inventors started experimenting with film as a crowd medium, as they discovered ways of projection films onto a screen, quite independently of each other. However, it was the Lumière brothers in Paris who made the best advertised public screening of films at the end of 1895, quickly turning the city into the international capital of movie production. 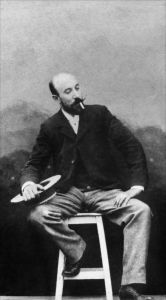 While the Lumières were the initial giants of the movie industry, two large Paris companies soon took over, Pathè, a phonograph company, and Gaumont, a producer of photographic plates. However, the company that would truly revolutionise film was an independent studio called Star Film, run by Thespian, theatre owner and stage magician Georges Méliès. Méliès combined his stage tricks with exquisite theatrical sets and a childish infatuation with mischief and storytelling. Méliès pioneered many of the special effects tricks were to become staples in the film industry for decades to come, such as the stop trick, matting, double exposures, black screen photography, split-screen photography and forced perspective. He also brought his stage effects like smoke and pyrotechnics to the screen. Other pioneers in the field were French Alice Guy Blaché and Ferdinand Zecca, British Robert W. Paul and Walter R. Booth, as well as Americans Edwin S. Porter and Wallace McCutcheon. But it was Méliès who led the charge with ever longer and more elaborate films, primarily based on the French stage tradition of the féerie play – plays which told fantastical stories with spectacular visuals, including lavish scenery and mechanically worked stage effects, often based on myths, fairy-tales or fantasy novels. Féeries blended music, dancing, pantomime, and acrobatics, as well as magical transformations created by designers and stage technicians. Méliès’ first international hit was his adaptation of Cinderella in 1899, followed by a retelling of the myth of Jeanne d’Arc in 1900, quickly making him the most successful and the most imitated filmmaker in the world.

A clip of Méliès himself in the 1898 film The Four Troublesome Heads.

But the 1890’s did not yet bring much in the way of science fiction to the screen. Three films which could be considered at least proto-sci-fi were made in the latter years of the decade; Louis Lumière’s The Mechanical Butcher (1895, review), as well as Méliès’ Gugusse and the Automaton (1897, review) and The Astronomer’s Dream (1898, review). The most important of these was the latter, as it was already over two minutes in length, and told a substantial story with a clear dramatic arc. It also featured the face in the moon, something Méliès had toyed with in earlier films, and which would become such an imitated and oft-used trope, that is has become the defining symbol for the earliest 15 years of cinema.

The 1890’s were a decade of great technological optimism. Along with cinema, the two inventions that towered over the rest were the automobile and the airplane. The former was already in commercial production by 1890, and during the decade innovations like the diesel engine was made. Inventors all over the world were experimenting with flight, and several crucial breakthroughs were made, which enabled the Wright brothers to take to the skies in 1903. This techno-optimism was fully on display in the early movies, which would depict magical machines such as the one in The Mechanical Butcher. 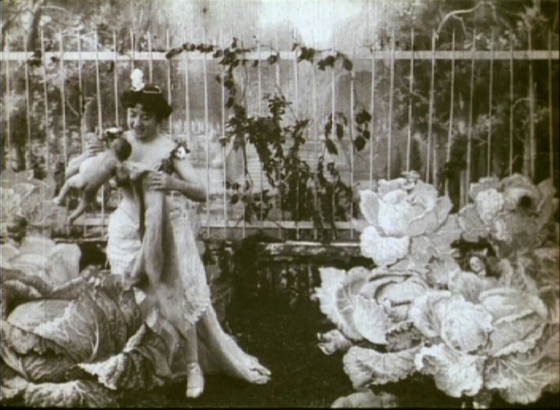 A scene from Alice Guy Blaché’s film The Cabbage Fairy from 1896, perhaps the first fantasy film ever made.

But despite the movie projector turning films into a mass medium, movies were still cheap and undignified entertainment, showed primarily at amusement parks alongside the two-headed baby and the bearded lady. Few serious actors ventured into film, and no serious stage director would dream of lowering himself to the standard of the stage magician or the juggler. And very soon after the first bewilderment, the audience’s hunger for tricks and moving images wore off. Newsreels depicting re-enacted scenes or even documentary footage from the Greco-Turkish war, the Spanish-American war and the Philippine-American war, as well as domestic affairs like the Dreyfus affair, the many strikes in both the US and Europe, egged on by the rising workers’ movement, socialism and anarchism, as well as the temperance movement and the suffragette movement held audiences thrilled with newsreels for a while. However, these reels also soon lost their hold on the public, and entering the 20th century, the fledgling movie industry was faced with a slump, and a potential demise as the passing fad that the Lumière brothers were quick to label it as. But in search of a solution, studios were now eyeing with great interest the ever longer fantasy films produced by people like Alice Guy Blaché, and in particular Georges Méliès.

In the literary field science fiction – even though the term was not yet coined – was establishing itself as a force to be reckoned with. In the 1860’s and 1870’s French writer Jules Verne had emerged as the master of the adventure novel, with his Extraordinary Voyages, and was still a highly productive writer in the 1890’s, both as a novelist and a playwright. Robur the Conqueror had been released in 1886, and later inspired a whole number of aviation-themed films. While his most famous works were more or less written by this time, he did produce a number of sci-fi novels in the 1890’s, such as The Purchase of the North Pole and An Antarctic Mystery, as well as The Floating Island (or Propeller Island), and Facing the Flag, which dealt with a weapon of mass destruction.

If Verne was the grand old man of “scientification novels”, as they came to be called before the term science fiction novels were invented, then the new kid on the block giving serious challenge was the British crypto-socialist and anti-imperialst H.G. Wells, gifted with an imagination fuelled by both studies in natural sciences, such as the work of Charles Darwin, and political philosophy. Between 1895 and 1900 he published five of his six early, and perhaps most important, sci-fi works: The Time Machine, The Island of Doctor Moreau, The Invisible Man, The War of the Worlds and When the Sleeper Wakes. In 1901 he would publish the sixth: The First Men in the Moon.

Mary Shelley’s Frankenstein was still widely read, and a staple of the stage, and Edgar Allan Poe was considered a classic. In 1886 Robert Louis Stevenson carried on their legacy with Dr. Jekyll and Mr. Hyde, and in 1897 Bram Stoker released Dracula. Numerous other authors had dabbled in science fiction during the 19th century. But still literary sci-fi was not to be seen in these early films, just as it was fairly absent from the first decade of the 20th century, with the lone exception of Verne.

Regarding science fiction films, the 1890’s can perhaps be seen mostly as a dry-run, and sci-fi entered the picture more as a part of a larger experimentation with techniques and themes.