A Voyage Around a Star

(4/10) An astronomer travels to woo the lady in stars by enclosing himself in a soap bubble in this 1906 short film by Gaston Velle.

An old astronomer in a huge white beard and a robe looks through his telescope, inspecting the moon from his very VERY large window. A woman in the moon appears. Wow! And then Saturn, in which lives a grumpy old god. And HOLY MANOLY! There appears a beautiful woman on a star! The astronomer’s heart is pounding! Such an apparition of beauty! The astronomer must reach the moon to propose to this celestial creature! But how? How can such a feat be accomplished? He asks he assistant. His assistant scratches his head in deep thought. It doesn’t help. Then he scratches the professor’s head in deep thought – and then: Eureka! Soap bubbles!

Yes, the assistant explains his idea: soap bubbles rise if you blow on them. So if you can create a really big soap bubble, and put the professor in it, it will also rise of you blow on it. Said and done, the professor sits down in a tub, and the assistant brings out all the soap he can find and throws it in the water, using a bellows to make a gigantic bubble that encloses the astronomer. He creates a draft with his apron, and up the astronomer goes, sailing through the skies, past the seven stars of the Pleiades until he reaches his goal, where he is greeted by a group of film company Pathé’s very own dancing girls, who do a little dance for him. This is stipulated in the Pathé agreement N:o 187/B45: all travellers, when greeted by selenites, fairies, overgrown insects, butterflies, Santa’s little helpers, demons in hell, tropical island tribes, Japanese geishas, Lilliputians, giants, Martians, beings concocted in fever dreams, or indeed star women, must be greeted with a small ballet number performed by Pathé’s dancing girls.

The astronomer has lift-off!

After this formality is over, a door opens in the centre of the star (this is another stipulation: when visiting a foreign celestial body, one must always enter through one of said body’es orifices) and the astronomer is showed into a room where the lady he saw earlier is waiting She is the queen of the stars, and she gives him a hat. This is obviously some very intimate ritual among the stars, because in storms Saturn with a flash and a puff of smoke He. Is. Not. Happy. The astronomer is immediately de-hatted, and old grumpy Saturn promptly sees through it that he is returned back out from space from whence he came through the same orifice. The astronomer tumbles back down towards Earth and is impaled by a roof spire. The End.

If you think this sounds like a scenario dreamed up by French film pioneer Georges Méliès, I don’t blame you. But Méliès doesn’t end hos films by having his celestial explorers impaled on a rooftop spire. No, this is the work of Méliès’ evil twin Gaston Velle at rival film company Pathé. After releasing a steady stream of high-profile fantasy and science fiction films since 1899, Georges Méliès was the undisputed king of early cinema. And while Pathé through sheer power of bulk ruled supreme over the international film market, they just couldn’t compete with former stage magician Méliès’ imagination. So in 1903 Pathé brought in fellow magician Gaston Velle to try and imitate the style of Méliès with the same kind of trick film, and especially his fantastical voyages into space, which he had had so much success with, in 1902 with A Trip to the Moon (review) and in 1904 with The Impossible Voyage (review).

Velle soon proved to have a unique artist’s eye, and often took the tricks that Méliès had pioneered and added his own little quirks and ideas, taking full advantage of Pathé’s patented stencil colouring technique. His films were often surrealist choreographies of colour, movement and metamorphoses, with a strong use of reverse photography, stop tricks and black screen double exposures. La danse du diable and Japanese Varieties were two early 1904 films that showed off his strengths. 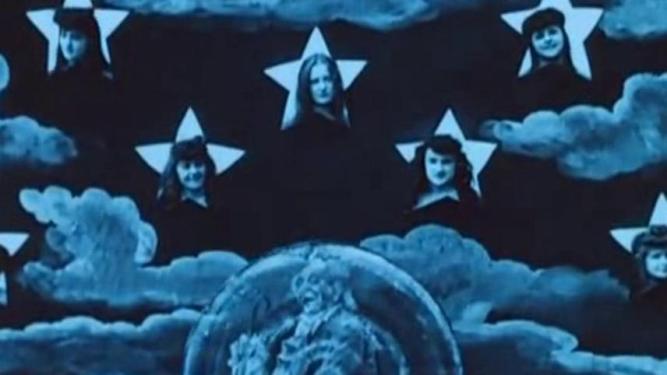 Faces in the stars, right out of Georges Méliès’ playbook.

In 1905 Velle and Pathé’s head of film production Ferdinand Zecca took on Méliès’ celestial journeys for the first time with The Moon Lover (Réve à la lune, review), which wasn’t nearly as ambitious as Méliès’ films, but tried to put their own spin on the theme. In a sense, it was more inspired by Méliès’previous short film The Astronomer’s Dream (1898, review). That film also served as the inspiration for their next effort, A Voyage Around a Star (Voyage autour d’une étoile, 1906).

While bigger in scale than The Moon Lover, the film is still only six minutes long, and still nowhere near the extravaganzas that Méliès produced. The visuals owe a lot to Méliès, who created the standard for these kinds of films. Everything from how the astronomer is dressed, to showing stars in the sky with female faces, through cutouts in the background, to the 2-dimensional stagy sets, and so on, all full-on Méliès. However, Velle should be credited for not copying Méliès’ modes of transportation, but instead coming up with his own unique ideas. In this sense A Voyage Around a Star is less influenced by Jules Verne, and more perhaps by H.G. Wells, who in his novel The First Men in the Moon invented “cavorite”, a material that negates gravity, and builds a spherical space ship out of it. While the soap bubble method in A Voyage Around the Star may seem fantastical, I still put it in the realm of science fiction, rather than magic, as it is based on a scientific notion, however flawed. And in all honesty, Wells’ cavorite makes even less sense.

The lady in the moon presents herself.

While the film is technically superior to The Moon Lover, it doesn’t give me that giddy and fuzzy sensation that Velle’s previous film did: perhaps it is the absence of Zecca as co-writer and co-director, or perhaps Velle just isn’t that excited about making what were essentially copies of other people’s films. I think the soap bubble thing is brilliant, but that’s about it, the rest is just too derivative and stale. It’s a great punch-line, though, having the astronomer impaled at the end, it sort of comes right of the blue and must have been a shocker to audiences watching it on the big screen. Perhaps one can view it as a sign of Velle’s frustration. Méliès did pay homage to the shot in a humorous way in his 1912 film The Conquest of the Pole.

Still in 1906 Velle released a more unique film called Les Invisibles (The Invisible Men) about two 18th century thieves who accidentally steal in invisibility formula and wreak havoc on the town. It should not be confused with Segundo de Chomon’s and Ferdinand Zecca’s pioneering The Invisible Thief (1909, review), which was clearly based on H.G. Wells’ novel, which Les Invisibles wasn’t. In 1907 Velle made another Méliès ripoff, Le Petit Jules Verne, this time to give Pathé their own version of Méliès’ film Under the Seas (1907, review).

The assistant takes a dive,

Gaston Velle made his major films during a short time-span between 1904 and 1906. To the above mentioned can be added Burglars at Work (1904), The Rajah’s Casket (1905) and The Hen that Laid the Golden Egg (1905). These were all successful at the time, but none could quite compare with the work of Méliès and later de Chomon in scale or imagination. Often Velle’s smaller films – where he presumably had freer reins – were more interesting, certainly more artistic. His career at Pathé was cut short as he was briefly appointed as the head of film production at Italian film company Cines in 1906. But apparently he didn’t get along with the company, as he returned to Pathé in the end of 1907. After his return Cines instigated a row between the two companies, as they accused Velle of plagiarising Cines’ films for Pathé.

Velle retired from filmmaking in 1913: like so many of the old pioneers, he was unable to keep up with the rapid changes in the art of cinema: shot-based storytelling, continuity editing, realism, close-ups and the emergence of the feature film. For a long time Gaston Velle was almost completely forgotten, even as the reputation of contemporaries like Méliès, Zecca and de Chomon was gradually restored. To this day, there’s not a lot of information of him online, but he is being included in a number of books on early cinema, and a few years ago Italian film festivals and scholars started taking an interest in him.

Velle’s son Maurice went on to become a cinematographer in the twenties, and apparently worked unsuccessfully on developing colour film. Maurice had a family with Irish screenwriter Mary O’Connor, known as Mary Murillo, who at one point moved to Hollywood, where she enjoyed a rather successful career. As far as I can tell, no real biography has been written on Velle, but apparently film scholar Luke McKernan has done some research into his life in conjunction with an Italian film festival, so one can hope that he makes the information available at some point.

Scifist Reading Tip: “In the Days of the Comet” (1906) by H.G. Wells. I have a 1st MacMillan & Co edition.
Scifist Reading Tip: “Underground Man” (1904) by Gabriel Tarde. I have a 1905 1st English ed. by Duckworth & Co, transl. by Cloudesley Bereton and with a preface by H.G. Wells.
Movie review: "Earth vs. the Flying Saucers. "Columbia’s 1956 classic is the epitome of the 50’s UFO movie. The script is clichéd and the production cheap, but Ray Harryhausen’s animation and the taut direction make this a fun, highly intertaining saucer ride. 7/10"
Still here! Happy new year!
Screening in a minute at @kinoregina in Helsinki: "Mad Max 2: The Road Warrior". 😲
Scifist Reading Tip: “Time in Advance” (1958) by William Tenn. I have a Bantam 1st ed.
Follow scifist 2.0 on WordPress.com

Scifist Reading Tip: “In the Days of the Comet” (1906) by H.G. Wells. I have a 1st MacMillan & Co edition.
Scifist Reading Tip: “Underground Man” (1904) by Gabriel Tarde. I have a 1905 1st English ed. by Duckworth & Co, transl. by Cloudesley Bereton and with a preface by H.G. Wells.
Movie review: "Earth vs. the Flying Saucers. "Columbia’s 1956 classic is the epitome of the 50’s UFO movie. The script is clichéd and the production cheap, but Ray Harryhausen’s animation and the taut direction make this a fun, highly intertaining saucer ride. 7/10"
Still here! Happy new year!
Screening in a minute at @kinoregina in Helsinki: "Mad Max 2: The Road Warrior". 😲
Scifist Reading Tip: “Time in Advance” (1958) by William Tenn. I have a Bantam 1st ed.
Loading Comments...
%d bloggers like this: