(6/10) Walter R. Booth’s short film is a subversive and funny trick film about a couple of mad motorists that speed through the British streets, toppling police officers, riding up store fronts and finally circling the rings of Saturn. Inspired by Méliès, but with a creativity of its own.

Along with France and the US, Britain was at the vanguard of cinematic development in the first 20 years of the art form, before it was steamrolled by the Danes and the Italians. Beside France it was also the only country with any substantial output of science fiction films before 1910. And this was exclusively thanks to one man, Walter R. Booth, who made all of them.

The ‘?’ Motorist is a little over three minutes long and partly uses the same kinds of trick film techniques that were developed by Georges Méliès. But Booth has also developed a style unique to himself, and incorporates more animation, and especially more outdoor footage.

The film opens with a man and a woman driving a car along a road, running over a police officer who tries to stop them, using a replacement stop trick with a dummy, a refinement of a trick Booth used in the 1903 film An Extraordinary Cab Accident. Don’t worry, the policeman gets up, and is fine. It takes more than getting run over by a car to stop an English bobby. Still chased by the police, the couple start driving straight up the wall of a building and shoot off into the sky, a very much Méliès-inspired sky.

The motorists taking a police officer with them.

Another thing Méliès-inspired is the man in the moon, but contrary to other directors, Booth doesn’t have the motorists enter the moon’s eye or mouth, but simply drive around it, before they shoot off to Saturn, where they take a trip around the planet’s rings. From here it’s a drop back to Earth, where the car crashes through the roof of a court house. Here we can see an early use of continuity shooting, where Booth first films the car going through the roof of a miniature of the building, then moves inside the court house ans shows the car crashing through the room again, this time from another angle. The couple drive out of the court house, but have to stop to tinker with the engine. They are then approached by the police, but suddenly the car turns into a horse-driven carriage. “Sorry, officer, can’t be us you’re looking for, we don’t own a car. Tataa!” Just as soon as they are let up into the carriage, it turns into a car again, and takes off, as the mad motorists wave with glee at the police officers.

The movie is produced by Robert W. Paul, who was Britain’s primary cinematic innovator and promoter in the early days of cinema. When discussing the early days of the movies, Britain is often a bit sidestepped, despite the fact that much of the technical advancements were made by Paul and his early collaborator Birt Acres. Paul, who was by trade a maker of scientific instruments, got started in the movie business in 1894 when he found out that by some oversight, Edison hadn’t patented his peep-hole film viewing device, the Kinetoscope, in England. So he took it apart and tweaked it, designing a new English version. However, there were no films in England to view with the new machines, other than bootleg copies of Edison films. To solve this, he figured he needed to start making films, and for that he needed a camera, and buying a patented Edison camera would be expensive. So along with Acres he designed his own camera in 1895.

After opening a Kinetoscope parlour, he started experimenting with ways in which to project films on a screen, inspired by the success of the Lumière brothers’ screenings in Paris in 1895. Acres presented his version in January 1896, and Paul followed suit with a competing projector in February 20, ironically the same day as the Lumière brothers first showed their films in London. Paul also continued refining his camera, making it lighter and more portable, and was the first to create a camera with a reverse-cranking option, which made such things as multiple exposures possible, opening up completely new possibilities for special effects and trick filming. It was such a camera that Georges Méliès purchased from Paul when he started making films in 1896.

Paul started making movies as early as 1895, first alongside Birt Acres, later by himself or with infrequent collaborators. The first ones were simply short clips of everyday life, news footage and events, soon he also started filming short comedy clips, mostly outdoors. In 1898 he constructed Britain’s first movie studio, and in 1899 he met Walter R. Booth, who would take British filmmaking to a completely new level. 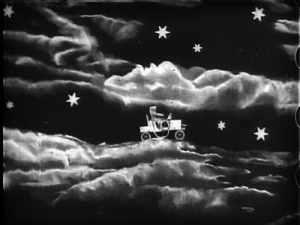 The ‘?’ Motorist contains many of Booth’s trademarks: dynamic editing, a creative mix of animation, miniatures and visual effects, as well as something akin to a gleeful anarchy, both regarding story and visuals. The shot of the motorists’ car suddenly turning into a cardboard cutout making its way up a wall is wonderfully bold. The way the police officer just gets up and brushes his pants after being run over with a car anticipates later Looney Tunes cartoons.

There are no obvious literary inspirations for The ‘?’ Motorist, however Booth does borrow the look of space and its celestial bodies from Méliès. The rest of the film is done i classic slapstick style with a sort of deadpan panache that would later be picked up by Buster Keaton. It combines many of the elements that were hot topics of the day: aviation, cars and space. The film is not terribly pioneering in any way, but it uses the effects of the day well and the filming and editing feel surprisingly modern for a 1906 film. The travelling mattes of the car flying through space are so-so, just as in Gaston Velle’s film The Moon Lover (1905, review), the double exposure turns the car overexposed and translucent.

An example of a not-so-well done double exposure.

The film has a rather whimsical charm, as critic Richard Scheib puts it: “The most charming scenes are where we see the car gracefully passing through the clouds, riding up and down each of them as though they were gently rolling hills, and then conducting a 360 degree circle around the circumference of The Moon (which has a face) and flying on to land on the rings of Saturn, conducting a circuit around them, before returning back down to Earth.”

Walter R. Booth was a porcelain painter turned stage magician, who presumably met Robert W. Paul at the Egyptian Hall, where he worked, as Paul exhibited his films there. The two struck up a partnership, as Booth was interested in filmmaking and Paul needed a collaborator who could help him with the drama and, more importantly, with developing movie tricks. Booth’s first two directorial efforts were The Miser’s Doom, a ghost story, and Upside Down; or; the Human Flies, both made in 1899. The latter portrayed a magician enchanting a group of people, making them stick to the ceiling – an effect accomplished by simply turning the camera upside down. Many of their early collaborations involved magic tricks, which Booth adapted from his stage show. But they also pioneered the use of miniature models in their 1900 film A Railway Collission. 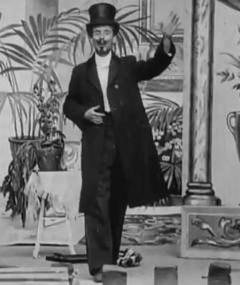 The duo’s roads parted in 1906, when Booth went to work for Charles Urban, the man responsible for exporting Méliès’ films to the US, much to Thomas Edison’s dismay. With Urban he made a trilogy of aerially themed science fiction films, The Airship Destroyer (1909, review), The Aerial Submarine (1910, review) and The Aerial Anarchists (1911), the last one of which seems to have been lost, as has the 1915 movie The Menace of the Air. In 1911 Booth also updated The ‘?’ Motorist as The Automatic Motorist, again taking flight. This was one of his last fictional films, as he then moved into advertising, after which film scholars seem to have lost his trail. It is probably no coincidence that so many of the great innovators of cinema’s first 20 years were more or less out of the business or pushed away from the spotlight by 1915. The new language of cinema created by American directors like Cecil B. DeMille and D.W. Griffith, the Italian historical blockbusters, followed by the Futurists, and brave Swedish innovators like Victor Sjöström and (Finnish-born) Mauritz Stiller was a language that these once so innovative filmmakers either could not or would not understand.

The mail brought a 1st edition of L.P. Gratacap's novel "The Certainty of Future Life in Mars". 🤩
Got mail. ❤
#maythe4thbewithyou
HOLY HELL JOE DANTE JUST WROTE A COMMENT ON MY BLOG.
Scifist Reading Tip: “That Hideous Strength” (1945) by C.S. Lewis. I have a Finnish 1985 Kirjayhtymä ed in transl by Matti Kannosto as “Piinattu Planeetta”. Cover art: Piotr Tomaszewski.
Went shopping at the great @aavetaajuus in Helsinki. Proprietor saw me nosing the two old SF books in the shelf and went into the backroom to get a stack of lovelies for me. So glad I was finally in the neighbourhood during the shop's opening hours!
Follow scifist 2.0 on WordPress.com

The mail brought a 1st edition of L.P. Gratacap's novel "The Certainty of Future Life in Mars". 🤩
Got mail. ❤
#maythe4thbewithyou
HOLY HELL JOE DANTE JUST WROTE A COMMENT ON MY BLOG.
Scifist Reading Tip: “That Hideous Strength” (1945) by C.S. Lewis. I have a Finnish 1985 Kirjayhtymä ed in transl by Matti Kannosto as “Piinattu Planeetta”. Cover art: Piotr Tomaszewski.
Went shopping at the great @aavetaajuus in Helsinki. Proprietor saw me nosing the two old SF books in the shelf and went into the backroom to get a stack of lovelies for me. So glad I was finally in the neighbourhood during the shop's opening hours!
Loading Comments...
%d bloggers like this: