The Last Man on Earth

NO RATING: FILM NOT AVAILABLE

The United States’ first all-out sci-fi film, released in 1924, imagines what the world would look like if all men (but one) had been wiped out by a virus, leaving women to run the world. With such a ridiculous premise (a woman president!) this is naturally a comedy. 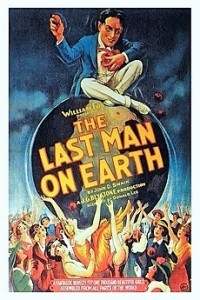 It is nothing short of a culture scandal that the first US science fiction feature film STILL hasn’t had any sort of home video or online release. There’s a perfectly good copy of the film sitting in the archives of MoMa in New York, and it’s even dragged out every now and then for film festivals and exhibitions. Bur for some reason MoMa seems allergic to letting the general public get its hands on the movie.

This is why I will not be reviewing, but rather mentioning, the 1924 film The Last Man on Earth, directed by John G. Blystone. Now, strictly speaking, this is not the first US feature film with sci-fi elements. The 1922 action melodrama The Man from Beyond (review) starring Harry Houdini did contain science fiction elements, as the protagonist was frozen in ice for a hundred years and woke up in present day 1922. The drama film Black Oxen (review) did revolve around a woman who had undergone a medical procedure to rejuvenate herself, it was more a romantic and social drama than a real sci-fi film. The two 1920 version of Dr. Jekyll and Mr. Hyde, the John Barrymore version (review) and the Sheldon Lewis version are close rivals, but ultimately they are more gothic horror than sci-fi. If this shows anything, it must be the low esteem that science fiction held in North America, as opposed to Europe, where celebrated directors made serious and expensive sci-fi films that often reflected the turmoil on the continent, stuck as it was between two devastating world wars, with communism and fascism on the rise. 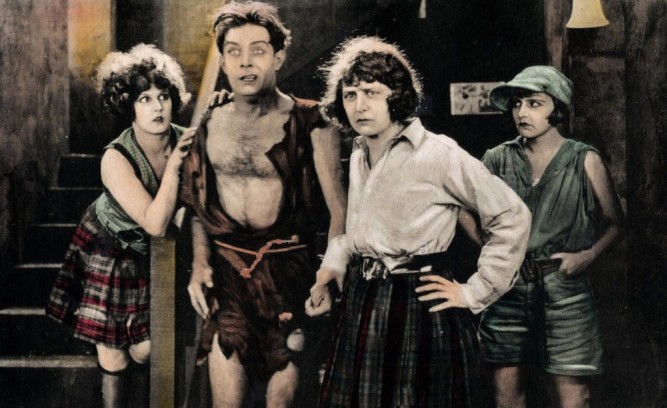 The premise of the film is based loosely on an idea expressed in Mary Shelley’s  book The Last Man, published in 1826. The Last Man is a very gloomy prophesy of mankind (or should we say ”humankind”) being wiped out by a mysterious plague. It is partly a metaphor for Shelley’s own huge losses – she lost her father at a young age, later her mother, a child and many friends prematurely – and partly a philosophical criticism of her dead friends’ romantic political ideas. It is a cynical view of a world where romantics and idealists, despite their best efforts, are ultimately doomed to failure, as well as Shelley’s own feelings of loneliness and isolation, both in a social and intellectual sense.

The idea was picked up by pulp writer John D. Swain who published a story called The Last Man on Earth in Munsey’s Magazine in 1923. The plague of Mary Shelley’s book does not discriminate by gender. In Munsey’s story, though, the world is ravaged by a virus called male-itis or masculitis, the name varies in different synopsises. All males over 14 are killed, and the women take over the world. Enter Elmer, a hermit who fled the world and love to live in a forest before the virus and survived, and his previous girlfriend, who suddenly has to fight for his man with all the women of the world. Humour ensues. 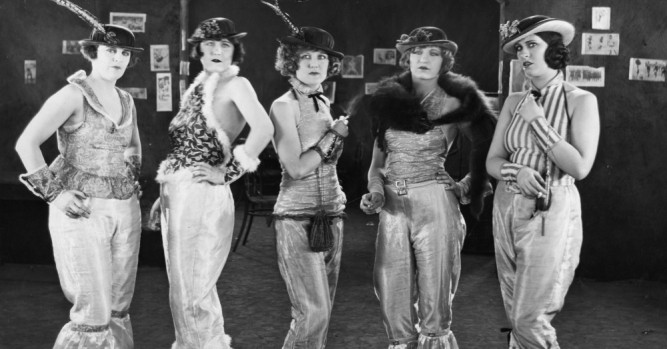 This is how ladies will dress with no men around.

Kyle Westphal writes for San Fransisco Silent Film Festival: “Swain’s story reads like a science-fiction goof taken a step too far, with the narrative often set aside to ruminate on the surprising dividends and unexpected consequences of a society without men. (Swain’s story has more speculative asides than the film, though the latter does add an extended womano-a-womano boxing match.) Among the effects of masculinitis: the real estate market evaporates and the surviving women have their choice of the poshest mansions; Prohibition remains on the books out of inertia, though alcohol abuse has plummeted in the absence of men; church attendance crumbles despite a new class of “frenzied female evangelists,” for “a manless religion was doomed to atrophy.” Football ceases to be played and literature loses its luster. “With love, fighting, sex jealousy, double-living, bootlegging, bohemianism, villains, missing heirs, and faithless lovers and guardians removed, what was the poor novelist to do?” wondered Swain.” 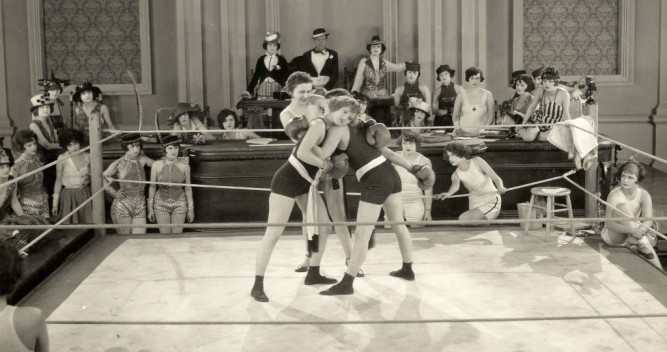 Female boxing was pure science fiction back in 1924.

The film came out five years after women were allowed to vote in USA, and this setup gives the filmmakers plenty of opportunity to point out what a silly, silly, silly world it would be if we had a woman for president and the States were run by ”Senatoresses”. Apparently it still stays within the limits of good taste. ”Of course we’d never see a film like this made today, but it was often funny and charming, and the audience had a good time with it”, writes Mike Carappa of thisisfamous.com. ”As for the concept of women now running the world on their own without the help of men – instead of making these females strong, powerful, women who skilfully take on their roles in this futuristic world and run with it, they are instead shown to be rather silly creatures who are completely desperate to get themselves a man! But, of course, it’s all in fun – and, hey, they do need to somehow keep the human population going”, says silentmoviecrazy.com. 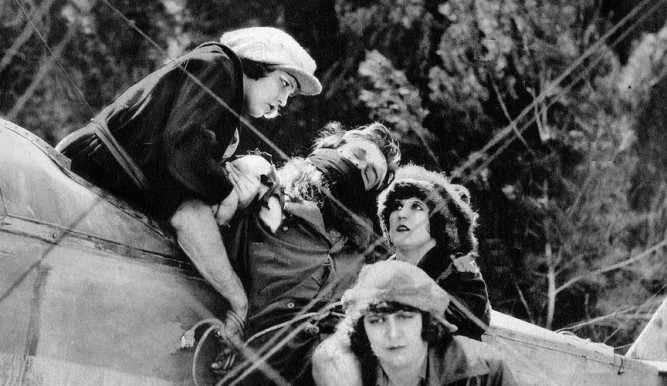 Would be interesting to know just what goes on here.

Farran Smith Nehme at Film Comment writes: “Whether in the bucolic childhood prologue or later as an adult, lovesick Elmer Smith (Foxe) can’t get so much as a smile from the love of his life, Hattie (Derelys Perdue). Hattie tells him—wait for it—“I wouldn’t marry you if you were the last man on earth.” And so a brokenhearted Elmer takes up residence in the base of the tree, while a terrible disease called masculitis carries away all men over the age of 14. Eventually he’s rediscovered by a gang of lady gangsters, who kidnap him and sell him to the highest bidder, which turns out to be the U.S. government. Two “senatresses” from Massachusetts and California wind up having a boxing match (which needed a few rounds trimmed) for custody of Elmer.”

Smith Nehme writes that the main interest of the film “lies in seeing how an all-female society is set up. The Last Man flashes forward all the way to 1954, when the world has “senatresses,” great women scientists, and the aforementioned woman president. But the other women are basically the same types you’re used to: flapper, tomboy, set decoration. The movie never entertains the notion that not all women, absent the need or desire to please men, would still want to tease their hair, or apply false eyelashes, or wear skimpy rompers that crawl up the backside as a work uniform in an infectious-disease laboratory, much less as a lady-gangster outfit for a day of man-auctioning and light racketeering.” 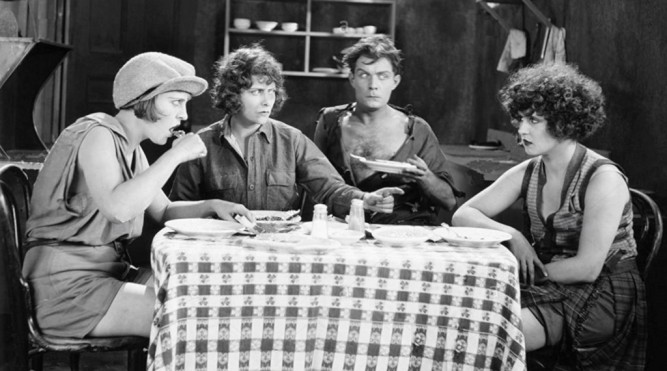 Dinner with the gansters.

Westphal continues: “If The Last Man on Earth never tries to inflate Foxe to the status of a sex symbol, that’s largely because the film is oddly indifferent to sex altogether. Though advertised as “A Fabulous Novelty with 1,000 Beautiful Girls,” the film gives those girls precious little to do. Helmed by Fox comedy specialist John G. Blystone, recently returned from a loan-out codirecting Buster Keaton’s Our Hospitality, The Last Man on Earth never really works through the rich implications of its premise, often content to mine the next gag. Why contemplate what women would do for pleasure in a manless world when the sight of a woman president or a woman street sweeper would be enough to generate a nervous chortle from an audience still coming to the terms with the new social order in the wake of the 19th Amendment? (Even years later, with universal suffrage an established part of the fabric of American life, the idea of a gynocracy proved too fantastic to resist, with Fox remaking the story in 1933 as a pre-Code musical, It’s Great to Be Alive.)
[…]
The comparatively worldly trade press found The Last Man on Earth rather tame. “With opportunities to be quite risque,” noted Moving Picture World, “there is nothing at all objectionable in the handling of this story.” Variety spent more space lamenting the obvious exploitation opportunities upon which the studio had failed to capitalize: “Suppose there had been a shot of every main street of every main city in the country showing how it would look in the day when there are no men on earth? That would have put in a local touch for every one of the key cities.” As it was, The Last Man on Earth was just another audience-friendly comedy from Fox, buoyed by its premise but not accorded the budget to present a fully fleshed-out slice of science fiction. “In fact,” intoned the industry’s paper of record, “the picture is just a super bathing-girl comedy and would prove a great attraction for the average burlesque houses.”” 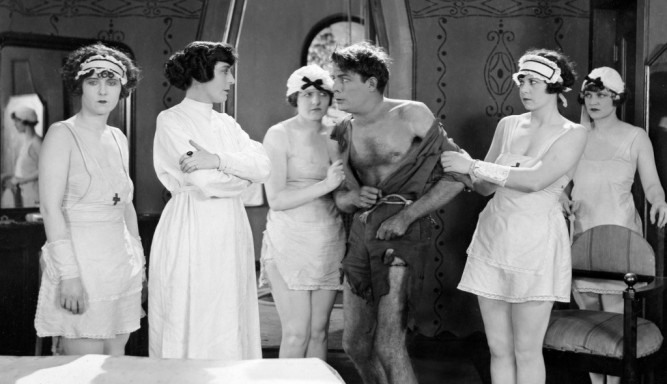 The Last Man on Earth was directed by John G. Blystone was, as noted above, a comedy specialist, and  apart from hos above mentioned Buster Keaton film, he is probably best known for directing a couple of Laurel & Hardy films, the Joan Fontaine musical comedy Music for Madame (1937), a James Cagney potboiler and one of the lesser Charlie Chan movies starring Warner Oland.

Earle Foxe was a popular character actor from the early days of Hollywood up to the beginning of the forties, appearing in a number of prestigious A-list films, not seldom playing villains. He was a favourite of John Ford’s, and appeared in other directors’ films opposite stars like Douglas Fairbanks, Jr., Barbara Stanwyck, Bette Davis, Joan Crawford, Lillian Gish, Peter Lorre, Fredric March, Maurice Chevalier and many others. John Ford actually gave him a lead in one of his lesser films, Upstream (1927).

Grace Cunard, playing Elmer’s wife, was something of a serial queen for Universal between 1914 and 1918, but later played mostly in B-movies, although she also went on to write and direct films of her own. The tall Derelys Perdue, playing the mobster Hattie, also a minor silent star, especially known for playing tough women, perhaps due to her unusual height.

This is one of the first films to toy with the Empty World theme, although Danish 1916 film The End of the World (review) did it way before this one. John D. Swain’s story was remade in by Fox in 1933 as a musical comedy with the title It’s Great to be Alive, which was also made as a Spanish version with the name El último varon sobre la Tierra.