(5/10) “Mexico’s Charlie Chaplin” Cantinflas shines as a research assistant in this SF romcom from 1948. Big Oil and authorities chase poor Cantinflas across the movie, believing he has his dead professor’s formula for turning water into oil. A talky and unnecessarily long, but sympathetic effort.

As you can see above, I’ve given this film 5 stars. That may be overly generous, but I’ve decided to give the movie the benefit of a doubt, since it is a very talky film, I don’t understand much of the dialogue, and I’m told much of the film’s charm lies in the original way the film’s star Cantiflas uses his language and dialogue. However, credits should be given to the movie for having such a clear structure and good direction, that even though I don’t technically speak Spanish, I had no trouble following the basic plot with the help of a synopsis and the little Spanish that I do understand.

So the plot, such as I perceive it is this: The old Professor Archimedes (Carlos Martínez Baena) is working on a revolutionary formula that would turn water into oil. His assistant, the romantic young Cantinflas (Cantinflas), is working on his own formula for increasing the longevity of roses. One night the reporter Marisa Miranda (Perla Aguiar) sneaks into the house to get the story on the oil formula, and hides in Cantiflas’ room, where she is detected by Cantinflas himself, who allows her to stay and sleep in his bed. During the night Archimedes decides to try to help Cantinflas, and lo and behold, is able to perfect the formula for increasing the life span of roses. While he thinks Cantinflas is sleeping, he sneaks into his room and puts a rose by the bedside, with the note ”Your dreams have come true”, along with the formula. In fact, it is Miranda who is curled up under the sheets and finds the note.

Before going to sleep, Archimedes writes in his journal something along the lines of ”I have discovered the formula for …” and then promptly dies. When authorities turn up in the morning, they find the note, believing it to be the formula for water to oil. Now, the Oil Company would be out of business if the formula ever came to be publicised, so now they set the mafia on Cantinflas’ tails to retrieve the note. Cantinflas, on the other hand, is ridiculed for his master’s wild dreams about water to oil, and enraged he lies and tells them that Archimedes indeed finished his formula, and then of course the chase is on.

This 1948 effort is the second pseudo-sci-fi film coming from Mexico in two years, the previous one being the veritable dung heap that was Boom in the Moon (1946, review), starring Buster Keaton. That film was written and directed by Jaime Salvador, who has written the screenplay and the dialogue for this movie as well. The story, however, was cooked up by French screenwriters Jean Bernard-Luc and Alex Joffé, and Iñigo de Martino made a first draft of the script before Salvador took it over. Director on this effort is Miguel M. Delgado, who is remembered for directing over 30 films for Mexican cinema’s superstar, comedian Cantiflas. 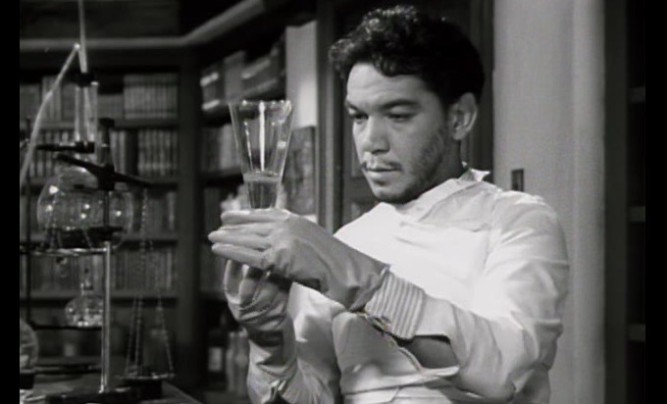 Cantinflas and a beaker.

The importance of Cantinflas for Mexican cinema cannot be overstated. During the country’s film industry’s golden years in the thirties and forties, Cantinflas was without contest the biggest movie star in Mexico. Cantinflas, much like Charlie Chaplin, created his signature character, a tramp, a man of the people, badly dressed and rough, who strove to do something with his life, and came through against all odds thanks to his wits, his street-smarts and his cunning Groucho Marx-styled wordplay and banter. Cantinflas almost created a whole new style of speaking, and many of his lines made their way into everyday language. During the latter part of his career he also engaged heavily in politics, especially fighting for the labour unions and workers rights (even though he was a conservative). During the forties his films were so successful, that he was able to rent Columbia Pictures’ studios in Hollywood to make his movies.

International audiences may know Cantiflas best for his role as Passepartout in the smash hit Around the World in 80 Days (1956), a role for which he won a Golden Globe. In the US and parts of Europe, David Niven (as Phileas Fogg) got top billing, but in all of the Hispanic world, as well as countries like Italy, France and in Eastern Europe, Cantinflas was top billed in the movie. Such was Cantinflas’ brilliance, that Charlie Chaplin called him ”the greatest living comedian”. He tried to cement his career in the United States with two other films, including Pepé (1960), for which he was nominated for another Golden Globe, but his Spanish word play got lost in translation and his films were disappointments for US critics and audiences. Nevertheless, many of his films were released and dubbed in the United States. 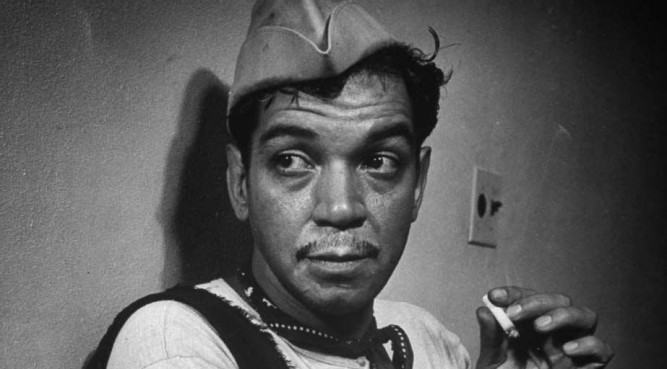 Cantinflas in his trademark getup.

In El Supersabio (released in the US as The Genius or The Super Scientist) Cantinflas partly sheds his normal character, even though it is at heart intact, to play the scientist’s assistant. And even though I don’t understand much of his dialogue, he is mesmerising to watch, not because of his physical comedy, of which there actually isn’t much in this movie, but because of his wonderful acting and sympathetic, boyishly handsome and humble charisma. Perla Aguiar does a decent job as Miranda, pleasant is the word contemporary critics might have used about her performance. Aguiar did not leave any great mark on cinema history, as she has only 12 acting credits, none of them of any particular greatness. Spanish-born Carlos Martinez Baena as Professor Archimedes does a wonderful old, kind-hearted scientist and even accomplishes some rather funny physical comedy. Martinez was not a hugely prolific, but very respected character actor who appeared in 72 films in his career and was nominated for an Ariel Award, the Academy Award of Mexico.

Although El Supersabio is in no way a high-budget movie, it does have a certain air of quality that shines through especially after I have spent so much time reviewing the terrible low-budget mad scientist movies of Hollywood, where ”direction” often means setting up a camera and letting the actors loose. Something as simple as a well-executed zooming crane shot makes me leap out of my seat with joy. The cinematography is fairly agile and there are some really nice cinematic setups. DP Raul Martínez Solares was an extremely prolific director of photography who won one Ariel Award and was nominated for four more. He may be known for friends of genre films as a specialist in Mexican horror films of the fifties and sixties, such as Night of the Bloody Apes (1969).

With good direction, excellent filming and decent acting, as well as the star power of Cantinflas, this is a light-hearted and enjoyable Mexican pseudo-sci-fi film. It is however, extremely talky, and I don’t only feel that way because I have a hard time following the conversation. One gets the distinct feeling that the script really doesn’t hold up for an hour and forty minutes, and that director and star have tried to pad out the running time with Cantinflas’ word play. One good thing about the US cinema’s programming was that B films were regularly cut down to fit the one hour slot that they were designated for. It wouldn’t have hurt this movie one bit to cut out fourty minutes. It is also decidedly a low-budget movie and never loses that low-budget feel, although Bustos and Gerszo do the best they can with what they’ve got. This would have been a four-star review, but I add one star for the dialogue, which was lost on me.

Mexican director Miguel M. Delgado travelled to Hollywood in 1928, as one of his close relatives was film star Lupe Vélez, who at the time was the boyfriend of Gary Cooper. Vélez was able to convince Cooper to hire Delgado as his personal assistant, and legend has it that Cooper in turn was able to get him a job as up-and-coming director Henry Hathaway’s assistant director. However, Hathaway himself only worked as an assistant director up until 1932, and Delgado left Hollywood in 1931. Delgado doesn’t have any credits on IMDb for work in Hollywood, so one can assume that if he indeed worked for Hathaway he was rather the assistant to the assistant director. What is clear though, is that he did work at Paramount in some capacity, and during his three years in Los Angeles he got to witness the shift from silent films to talkies, and thus returned to Mexico with valuable knowledge to a Mexican film industry that was soon to enter its golden years.

In Mexico he worked as an assistant director up until 1941, when he teamed up with Cantinflas for their first mutual film. In 1942 they first tried to reach an international audience with Los Tres Mosqueteros, a very loose adaptation of Alexandre Dumas’ famous book. It was screened at the Cannes Film Festival in 1946, but was universally panned by critics. The critics thought Delgado and Cantinflas resorted to jokes and gags where they should instead have been trying to parody the story itself. The film received mixed reviews in Mexico. Emilio García Riera went so far as to suggest that writer Jaime Salvador had not even read the book. Of course anyone who has seen the above mentioned Boom in the Moon isn’t surprised that Salvador wrote a weak script and that Cantinflas compensated the lack of material with gags and jokes. Miguel Delgado directed some of Cantinflas’ most successful films, but unfortunately in most cases the actor himself outshone the actual end product, and Delgado never rose to the top ranks of Mexican directors. He did, however, work as ”associate director” (presumably because of the language barrier) on the 1948 film Tarzan and the Mermaids, which was filmed in Mexico. It starred Johnny Weissmuller, who had at one time been married to above mentioned Lupe Vélez, which may be how Delgado got the gig. Incidentally our old friend from the mad scientist films, George Zucco also starred as a high priest. Delgado had a long career, and directed his last film in 1990.

Cantinflas with a member of Big Oil.

Editor Jorge Bustos was a multiple Ariel Award winner, who worked on such diverse projects as Luis Buñuel’s The Criminal Life of Archibaldo de la Cruz and the low-budget clunker The Robot vs. The Aztec Mummy (1958). Production designer Gunther Gerszo also won a heap of prices and worked with directors like Buñuel and Roberto Galvadon, and his last film was John Huston’s Under the Volcano (1984), filmed in Mexico.