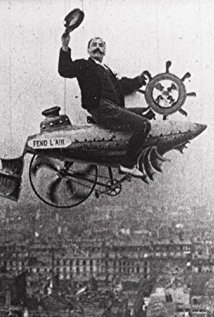 From The Flying Machine.

It’s a great joy to find really old films using special effects that make you go: “How on Earth did they do that?”. Such a thing happened to me when I tried to determine just what technique was used in Ferdinand Zecca’s short film The Flying Machine (À la conquête de l’air, 1901).

The film is no more than 25 seconds long, but it is perhaps the cleanest example of a science fiction film made prior to Georges Méliès’ 1902 classic A Trip to the Moon (review). There’s no plot, just a clip of Ferdinand Zecca himself riding a steampunk bicycle (that looks like a cross between a mini-submarine and a bike) high above the rooftops of Paris, giddily waving his cap at the viewer.

There are no visible lines or supports, so my first thought was that it must be done by way of blackscreen photography and double exposure: that the bike and Zecca had been filmed separately against a black backdrop. It is clear that  there is something fishy going on behind the bike, because when you look a second and third time at the film, you notice that Zecca only uses one leg to paddle the bicycle, the one facing the camera. This wound suggest a support structure on the other side preventing him from using the other leg.

However, blackscreen theory fell apart as soon as it occurred. The old precursor to bluescreen only works if the people and objects in front of the blackscreen are brighter than the background. But Zecca is dressed almost entirely in black, and the bicycle has a lot of black parts. If this was blackscreen, then all these areas would have been rendered transparent.

A clip of Méliès in the 1901 film The Four Troublesome Heads, using the blackscreen process.

My other thought was that the background wasn’t actually a long camera pan, but in fact a long painting of Paris being rolled behind Zecca – from the lightly grainy black-and-white print it isn’t entirely clear whether it’s actual footage or a painted backdrop. But first and foremost, nobody would make such a huge detailed and elaborate painting of Paris for a 23 second trick clip. And second, I noticed a slight shaking wobble distinct to early double exposure filming. In my desperation I went to such extremes as considering this was a real cinematic wonder – that Zecca would have actually invented some sort of early traveling matte technique allowing him to use some coloured backdrop rather than a black backdrop, but that was of course preposterous. Bluescreen technology was still decades away. I even toyed with the idea that they would have actually dangled Zecca from the Eiffel Tower, but fortunately came to my senses. 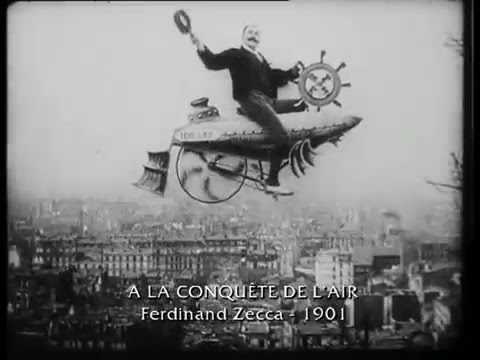 Ferdinand Zecca high above the roofs of Paris.

This really only left one alternative, and that was a simple split-screen matte shot. Which should naturally have been my first inclination, but there was something throwing me off balance: I could clearly see the tops of tall buildings in between the spokes of the bicycle’s wheel as it was turning, and this should not be possible if a split-screen matte was used. But I was fooled by a master cinematographer. I had assumed that the footage of Paris had been captured on a misty day, or with low clouds obscuring the tall buildings receding in the distance, making them blend in with the white sky. In fact Zecca had carefully done the matting so that the bottom part of the top image was ever so slightly translucent, allowing the tall buildings to just barely register as gray patches beneath the white background between the spokes, but leaving the image opaque enough not to visibly affect the dense blackness of the wheel and spokes. Thus creating a brilliant illusion. Genius cinematography.

So who was this cinematographer who so had me confounded? Although largely forgotten by most who aren’t aficionados of early film history, Frenchman Ferdinand Zecca was one of the driving forces of the early cinematic revolution in the late 19th and early 20th century, as he was more or less the artistic dynamo behind Europe’s biggest film studio Pathé. Along with primarily George Méliès’ Star-Film, and the other large French film company Gaumont, Pathé not only dominated the European market, but quickly launched a cinematic invasion on the US of such a force that business mogul Thomas Edison had to reach out to his contractors and rivals to form a film trust to clamp down in the influx of European movies into America, effectively creating a domestic monopoly.

Most of the big names in early film history – the Pathé and Lumière brothers, Leon Gaumont, Edison, John W. Paul – were primarily inventors, engineers, businessmen. They were often more interested in new technology, how to sell it and how to put their names on it, than in actually developing its artistic content. Méliès was an exception, because he was primarily an artist who also happened to create a film company. But these big names all had much less celebrated artists at their disposal who not only helped develop new techniques for using the medium, but also filled the empty frames with stories, laughter, shock, love, suspense, and horror. Edison had Edwin S. Porter, Gaumont had Alice Guy Blaché, Paul had Walter R. Booth and Pathé had Ferdinand Zecca.

What Is Seen Through a Keyhole was one of the first of the popular keyhole movies, and it poked fun at the semi-erotic films that were made in a large abundance for the early peep-hole film viewing machines like the kinetoscope.

Like many other early film pioneers, Zecca had his background on and behind the stage, as an actor, stage manager, singer and musician. In the late 1890’s he occasionally worked for Pathé as a voice artist – Pathé was at that time a phonograph company. In 1898 he was hired by Leon Gaumont as a film actor. Zecca acted in a couple of films for Gaumont, but was asked by Charles Pathé, the head of Pathé’s film operation, to set up the Pathé pavillion at the Paris World Fair in 1900, as Charles didn’t have time to oversee the work himself. So impressed was Pathé with his work, that he hired Zecca as an assistant director, and soon a director in his own right. Quickly he became Pathé’s right hand man, as director, writer, producer and occasionally actor (often in his own films). Zecca was often appointed as co-director on other directors’ projects.

One of his collaborators was Gaston Velle, with whom he made the humorous short The Moon Lover (1905), in which a drunken man climbs up a street light and a house in order to reach the moon, until he takes off in flight, and flies into the mouth of the moon. These space travel films were hugely popular thanks to George Méliès’ pioneering work in the field, and all of the subsequent ones are heavily inspired by his. In fact, Velle was one of the most prominent Méliès imitators at Pathé: his A Voyage Around a Star was a rip-off os Méliès’ The Astronomer’s Dream (1898), and Le Petit Jules Verne(1907) was a remake of Méliès’ Under the Seas (1907, review). 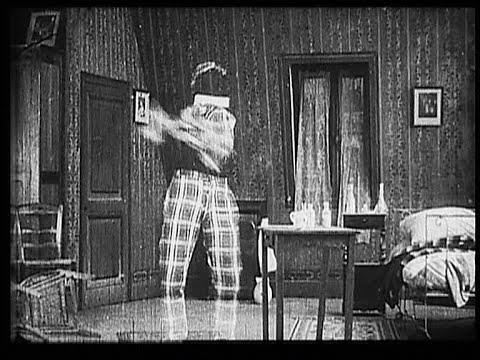 a still from the 1909 film The Invisible Thief.

Zecca himself dabbled somewhat with sci-fi, as did many of the early filmmakers, although the line between sci-fi, fantasy and magic are repeatedly blurred in many of these short clips. They were mostly intended to wow the audiences with clever trick filming, rather than tell coherent stories, such as The Flying Machine. He co-directed the 1909 movie The Invisible Thief (review), which was the first actual adaptation of H.G. Wells’ novel The Invisible Man, and which took the use of blackscreen photography to new heights by revealing an invisible character through undressing in a scene closely mirrored in James Whale’s The Invisible Man (1933, review), filmed almost 30 years later. However, Zecca was more interested in other subjects. Zecca was also a pioneer of feature films. In May 1903 he (along with co-director Nonguet Lucien) released the 44 minutes long The Life and Passion of Jesus Christ, which was probably the first European feature-length movie, preceded only by Siegmund Lubin’s similar Passion Play (60 minutes), which was released in January 1903 for Edison in the US. One cinematographer he collaborated with frequently was Segundo de Chomon, with whom he made some of his best films, including The Invisible Thief. 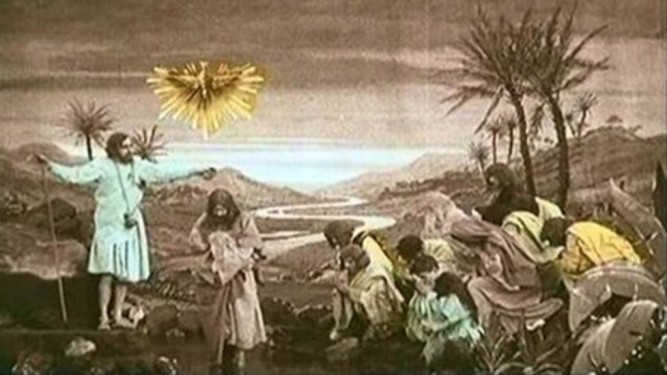 From Zecca’s 1903 epic The Life and Passion of Jesus Christ.

The Flying Machine isn’t in itself any landmark of greater significance for the history of cinema. While beautifully executed, the split-screen matte was already in regular use by trick filmers like George Méliès, and as such the film is just another in a long line of silly trick films produced at this time. Aviation as a theme, however, was one that was just about to explode in 1903 with the Wright brothers’ first controlled powered flight. As such, The Flying Machine is interesting, as it was a) probably the first film about flight that didn’t involve a balloon b) depicting flight powered by a “machine” before such a concept existed and c) predated Méliès’ famous rocket to the moon by one year. And this was probably the second actual science fiction film ever made, behind Louis Lumière’s rather sloppily filmed The Mecanichal Butcher (1985, review).

Categories: Conquest of Earth, Future technology, Futurism, In the air

Scifist Reading Tip: “In the Days of the Comet” (1906) by H.G. Wells. I have a 1st MacMillan & Co edition.
Scifist Reading Tip: “Underground Man” (1904) by Gabriel Tarde. I have a 1905 1st English ed. by Duckworth & Co, transl. by Cloudesley Bereton and with a preface by H.G. Wells.
Movie review: "Earth vs. the Flying Saucers. "Columbia’s 1956 classic is the epitome of the 50’s UFO movie. The script is clichéd and the production cheap, but Ray Harryhausen’s animation and the taut direction make this a fun, highly intertaining saucer ride. 7/10"
Still here! Happy new year!
Screening in a minute at @kinoregina in Helsinki: "Mad Max 2: The Road Warrior". 😲
Scifist Reading Tip: “Time in Advance” (1958) by William Tenn. I have a Bantam 1st ed.
Follow scifist 2.0 on WordPress.com

Scifist Reading Tip: “In the Days of the Comet” (1906) by H.G. Wells. I have a 1st MacMillan & Co edition.
Scifist Reading Tip: “Underground Man” (1904) by Gabriel Tarde. I have a 1905 1st English ed. by Duckworth & Co, transl. by Cloudesley Bereton and with a preface by H.G. Wells.
Movie review: "Earth vs. the Flying Saucers. "Columbia’s 1956 classic is the epitome of the 50’s UFO movie. The script is clichéd and the production cheap, but Ray Harryhausen’s animation and the taut direction make this a fun, highly intertaining saucer ride. 7/10"
Still here! Happy new year!
Screening in a minute at @kinoregina in Helsinki: "Mad Max 2: The Road Warrior". 😲
Scifist Reading Tip: “Time in Advance” (1958) by William Tenn. I have a Bantam 1st ed.
Loading Comments...
%d bloggers like this: